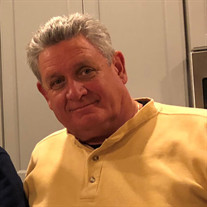 Clarke Jeffrey Krautler died peacefully on Thursday, January 16, 2020 in Orlando, Florida. Jeff was a loving son, a wonderful brother, and a great friend to many people. He was born on October 18, 1955 in Takoma Park, Maryland and grew up in Silver Spring, Maryland. After high school, he served in the United States Army from 1974 to 1977. He graduated from the University of Florida in 1982 with a degree in Building Construction. He remained an avid Gator fan throughout his life. He served as a Project Manager for Darden where he built hundreds of restaurants throughout the country.

Jeff was preceded in death by his wife, Cathy O’Shaughnessy and his father, Charles Krautler. He is survived by his fiancé, Lori Stephan; mother, Ellen Krautler of Annapolis, Maryland; sister, Linda Harten of Odenton, Maryland; brother Charles Krautler and sister-in-law Pat Krautler of Statham, Georgia; nephews Bob Marcum and Brian Krautler; nieces Kerry Haviland and Jessica Garbach; two grandnieces and four grand nephews. He is also survived by numerous friends and colleagues. Jeff was a great friend and a great story teller who will be missed by all who knew him.