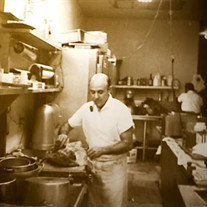 Louis (Lou) Agostini, died peacefully surrounded by his family in the Florida Hospital Hospice of Orlando on October 29, 2019 at the age of 91.

Lou was preceded in death by his parents Agostino Agostini and Eunice Agostini (Bombagi); his wife, the love of his life, Marjorie Agostini (Dey); and his siblings Arturo, Copernico, Aida, and Joseph.

Lou was born on June 28, 1928 in Paterson, New Jersey. He attended East Central High School and left to join the WWII war effort before graduating from High School. He was released from active duty January 20, 1948 and was awarded the World War II Victory Medal and the Army of Occupation Medal – Japan for his faithful service to his country.

Upon returning from the war, Lou purchased a used army jeep, converted it into an ice-cream truck and started a very successful ice cream business. He then purchased a restaurant with his older brother Copernico, called Curlys, which was famous in New Jersey for its hamburgers. Thus began a life long career of cooking alongside his brother. After Lou and all of his brothers moved to Miami, they became the kitchen staff at Lincoln Lane restaurant on Miami Beach, where Lou met his soon to be wife Marjorie. Eventually the family opened their own neighborhood Italian restaurant called “Copernicos” in North Miami Beach. Lou and Marjorie worked together at Copernicos while raising a family in a neighborhood just minutes away from the restaurant. Once this restaurant sold, Lou worked at a handful of restaurants, with his favorite time being the three years he worked at St. Thomas Aquinas University cooking for the Miami Dolphins during the team’s training camps. Lou eventually moved to Orlando and cooked in the restaurant of a Quality Suites Hotel in Kissimmee near Walt Disney World. He always delighted vacationing families by flipping pancakes on the griddle, and making wonderful homemade milkshakes; a skill he perfected early on while working at Curlys. After retiring from cooking, Lou was a greeter at Walmart for over ten years welcoming all with a smile, kind words, and always a clever joke.

Asked how he wanted to be remembered, he would say the following: “I did my best to be a faithful servant of Christ, a loyal patriot to my country, a good husband to my wife Margie, and a good father to my children.

May eternal rest be granted upon Lou and may his soul through the mercy of God rest in peace.